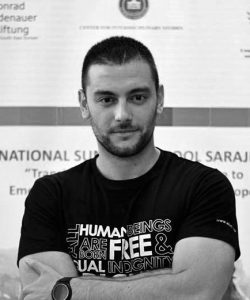 Lazar Stefanovic is Program Manager at MDRI-S in Belgrade.

He specializes in international normative and theoretical frameworks of deinstitutionalization of persons with mental disabilities. Lazar is currently involved in different projects and initiatives of MDRI-S and partnering national and international organizations.

Some of the efforts for the improvement of the state of rights Lazar has been involved with are actions to establish non-governmental mechanisms for UN human rights bodies reporting and monitoring the implementations of international standards in a domestic context; ensuring accessible elections; participating in workgroups to develop laws and public policies in Serbia; monitoring of residential social care homes etc.

Lazar previously worked for the Hungarian Civil Liberties Union, a Budapest-based NGO, where he conducted research on deinstitutionalization of children and adults in five countries of central and south-eastern Europe: Czech Republic, Slovakia, Poland, Romania and Bulgaria. The outcome was a 50-page long internal report on the current state of deinstitutionalization in the aforementioned EU members.

Lazar authored and co-authored a few professional publications such as “”The Look Overseas: What can Serbia and other Countries Learn from Canada’s Supported Decision-Making Mechanisms” and “Legal capacity and human rights: Guidelines for center for social work”.

In 2017 Lazar graduated from the program European Master of Arts in Human Rights and Democratization in Venice, Italy. During his master’s studies, after a semester spent in Venice, Lazar lived in Budapest and was enrolled at Eotvos Lorand University and Central European University where he conducted research and wrote a master’s thesis on the phenomenon of institutionalization and the related current issues in the Balkans, titled “Are Four Centuries of Systemic Segregation Coming to an End? A socio-historical analysis of custodial care with case studies on deinstitutionalization of children with disabilities in Bulgaria and Serbia”.

Lazar studied criminalistics and police studies before he enrolled at a faculty of law in Novi Sad, Serbia where he earned a Dipl.jur. degree in 2016. He also holds a certificate from Belgrade School of Human Rights “Vojin Dimitrijevic”, Serbia’s most notable human rights oriented educational establishment.