May 21, 2012–Washington, DC– This morning, an Op-Ed by DRI President Laurie Ahern was published in the Washington Post. The Op-Ed defends the actions of the Duchess of York, Sarah Ferguson, who is currently being prosecuted by the Turkish government for “acquiring footage and violating the privacy” of children in a Turkish state-run orphanage.
The ITV of London investigation was a follow-up to DRI’s 2005 report, “Behind Closed Doors: Human Rights Abuses in Psychiatric Facilities, Orphanages and Rehabilitation Centers in Turkey,” which documented the abusive treatment of children and adults locked away and forgotten in state facilities. 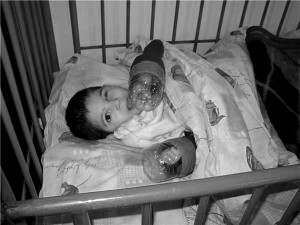 Toddlers in Turkey who scratched, hit and bit themselves - a result of mind-numbing boredom and lack of stimulation - had their hands "covered" by plastic liter bottles that had been cut in half and duct-taped around the children's wrists

As the Op-Ed states, “The hypocrisy of the Turkish government in prosecuting the duchess, who courageously exposed torture and neglect of Turkish children, is appalling. Turkish officials seem concerned with the privacy of children, most of whom have intellectual and physical disabilities, even as they violate those children’s most basic human rights…Children with disabilities hidden away in closed institutions have no voice, no choice and no control. They are the population most vulnerable to abuse at the hands of state actors.”
Please take a moment to read Laurie’s full Op-Ed.
To help DRI take advantage of this media attention and international pressure, please consider making a donation to DRI’s Worldwide Campaign to End the Institutionalization of Children. Children in Turkey, and across the world, can’t wait for more courageous individuals willing to risk their freedom to expose abuses. State governments must commit to immediately end placements of children in orphanages. Local and international funding must provide supports that allow families of children with disabilities to stay intact, and to provide safe and appropriate community alternatives to institutionalization. Every day, DRI fights for implementation of these policies, and for the realization of human rights guaranteed under the UN Convention on the Rights of Persons with Disabilities.
Thank you for your continued support.