If you are facing deportation from the United States and you:

you may have a right to stay in the United States.

In many countries, people who are placed in institutions or psychiatric hospitals do not receive proper care. They are tortured and locked up in dangerous conditions. Know your rights – click here for a description of your rights.

For more information on asylum law and your rights in detention and removal proceedings, see this document compiled for Disability Rights International by students in the Immigrant Justice Clinic at American University’s Washington College of Law (download here).

We recommend that you find an attorney to help you and advise you of your rights.

There are some organizations that may be able to help you find legal advice free of charge. See the following resources for information on finding legal advice:

For over twenty five years, DRI has documented human rights violations of people with disabilities confined to institutions around the world. DRI has been especially focused on demonstrating that abuse in institutions can rise to the level of torture as defined by the United Nations Convention Against Torture.

In 1999, the United States Board of Immigrant Appeals determined that an individual with a disability could qualify as a member of a “particular social group” for the purposes of protection against deportation. These cases are fact-based and difficult, but may be worth pursuing if your client has a disability and fears being placed in an institution.

Over the last 5 years, DRI has provided expert testimony and tailored declarations in over 100 cases for clients with disabilities across the United States. Our documentation from Mexico and Guatemala demonstrates that people with disabilities detained in institutions are likely to experience torture and other human rights violations. 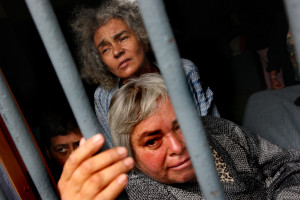 Women behind bars in an institution in Mexico

DRI staff have traveled to Mexico dozens of times since 1992 and visited more than one hundred residential institutions, psychiatric hospitals, nursing homes, social care facilities, and orphanages for people with disabilities. DRI has conducted extensive research and field work throughout Mexico regarding the lack of services available to people with disabilities in that country, as well as the abusive and torturous conditions in Mexico’s institutional facilities on which most disabled Mexicans must rely in order to survive in that country. In DRI’s 2010 report, “Abandoned and Disappeared: Mexico’s Segregation and Abuse of Children and Adults with Disabilities,” we documented that the Mexican government segregates thousands of people with disabilities from society by forcibly placing them in institutions. The primary reason for this is “Mexico’s lack of community-based services to provide the support necessary for individuals with mental disabilities to live in the community.”

Since the release of our report in 2010, DRI has made numerous return visits to Mexico and found that conditions in Mexico have not improved. DRI has continued to document widespread ill treatment and torture in institutions, including “physical restraints, cages and isolation rooms, chemical restraints and overmedication, lifetime segregation of people with disabilities, atrocious conditions of confinement, [and] forced sterilization.” 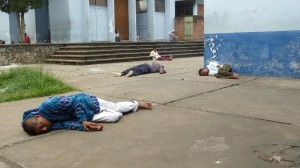 DRI first staff observed conditions at Federico Mora in person by visiting the facility in August 2011, March 2012, August 2012, and September 2012. We have sent in teams to investigate

conditions at Federico Mora every year since that time. DRI’s last visit to Federico Mora was in March of 2018. During visits to Federico Mora, DRI obtained dozens of first-hand accounts from current and former patients, psychiatrists, nurses, and other hospital staff.

DRI took immediate action by working with the Human Rights Office of the Archdiocese of Guatemala (ODHAG) to apply for precautionary measures with the Inter-American Commission on Human Rights. Filed on October 12, 2012, the Precautionary Measures Petition asked the Commission to order the Guatemalan government to protect the lives and personal integrity of people detained at Federico Mora, to halt new placements, and to plan for the transfer of current patients, among other things. The IACHR granted our Precautionary Measures Petition on November 20, 2012.