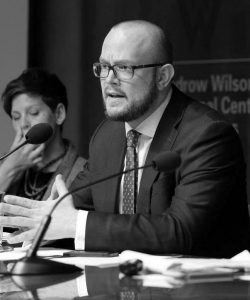 Eric J. Mathews, MD, is the former Associate Director of Disability Rights International and currently Resident Physician in the Department of Psychiatry at Harbor-UCLA Medical Center. At DRI, Mathews worked as a human rights researcher alongside in-country advocates, people with disabilities and governments to protect human rights and advocate for the effective implementation of the UN Convention on the Rights of Persons with Disabilities and other human rights treaties. He has led human rights investigations in Ukraine and the Republic of Georgia and has assisted in creating communication and development strategies for local partners. Mathews has worked on advocacy projects in Serbia, Kosovo, Ukraine, the Republic of Georgia, and the United States. He is the lead author of DRI’s reports Left Behind: The Exclusion of Children and Adults with Disabilities from Reform and Rights Protection in the Republic of Georgia (2013); International Collaboration for Inclusion: Lessons from Ukraine, A Study Funded by the US Department of State (2014); and No Way Home: The Exploitation and Abuse of Children in Ukraine’s Orphanages (2015). His reports have been covered by the Associated Press; BBC World News; Voice of America; The Guardian; and Vatican Radio. DRI’s work in the Republic of Georgia led to the adoption of new national guidelines mandating medical care of children with hydrocephalus who were denied life-saving interventions in the country’s orphanages, and was profiled by PBS’s The Visionaries documentary series.

Prior to joining Disability Rights International in 2009, Mathews worked as the Communications Director for a U.S. Congressional campaign in Georgia. He has also worked in the newspaper and television industries. Mathews is an alumnus of Piedmont College in Georgia.