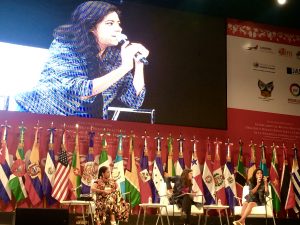 Priscila Rodriguez, director of DRI’s Mexico and Central America regional office and of the Women’s Rights Initiative of the Americas, giving a talk on sexual and reproductive rights of women with disabilities at a “Regional Dialogue on Best Practices to Eradicate Violence against Women” in the Mexican state of Hidalgo.

DRI has found through its investigations that abuse against women and girls with disabilities – such as trafficking, forced sterilization, sexual violence, and physical abuse – is rampant, especially when women and girls are locked away and forgotten in institutions and orphanages. In 2015, DRI released Twice Violated, a report based on a year-long study conducted with the Women’s Group of the Colectivo Chuhcan – the first organization in Mexico City directed by persons with disabilities.

Sexual and reproductive rights are linked with the right to legal capacity – the right to make decisions about one’s own life. This right is often denied or diminished for women with disabilities. In many countries, a woman’s rights may be overruled by the legal system if she is declared to be “mentally incompetent” and placed under guardianship of the state or of family members. Sexual and reproductive rights cannot be fully guaranteed unless all women with disabilities are allowed to remain in their communities and be recognized before the law as persons that can make decisions with legal effect.

Read more about our work to protect the human rights of women and girls with disabilities – www.driadvocacy.org/women-with-disabilities.