Kiev, Ukraine – April 16, 2015 – Today DRI released its groundbreaking report, No Way Home: The Exploitation and Abuse of Children in Ukraine’s Orphanages, the result of a three-year investigation into the country’s egregious human rights violations,  perpetrated against its most vulnerable citizens – children locked away in orphanages, institutions, boarding schools and other segregated facilities. 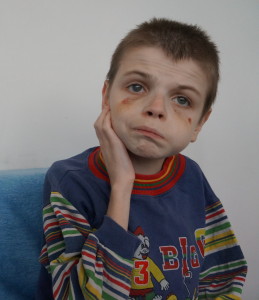 The report found children – both with and without disabilities – exposed to life-threatening neglect, physical and sexual violence, forced abortions and at- risk for being trafficked for sex, labor, pornography and organs. Locked away in remote facilities and with reported numbers of institutionalized children varying greatly, from 82,000 to 200,000, no one really knows how many are detained in them.
“When most countries are closing institutions and supporting children to live in communities and with families, Ukraine keeps rebuilding institutions and orphanages. We know they are dangerous on so many levels and they violate children’s most basic human rights,” said DRI Associate Director Eric Mathews and lead researcher/author of the report, “and international donors to Ukraine’s orphanages have greatly exacerbated this problem.”
“For children with disabilities, they are often the most abused and neglected and most will die in institutions. Children who are let go or “graduate” from facilities at the age of 15 or 16, are sitting ducks for traffickers as they face life on the streets alone,” said DRI President Laurie Ahern. “And children caught in the cross-fire of the current armed conflict in Eastern Ukraine are especially at risk of being abandoned and disappearing from institutions.”

Coverage of the report by the Associated Press is featured in US News and World Report, the New York Times, and the Washington Post.

Listen to coverage of No Way Home: The Exploitation and Abuse of Children in Ukraine’s Orphanages on Vatican Radio.