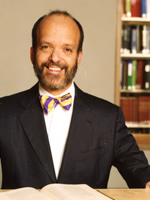 It is with great sadness that we at Disability Rights International (DRI) mourn the death of Paul Steven Miller, a former DRI board member and a legend in the disability rights movement in the United States. Paul died at his home on October 19, 2010,  following a long illness, surrounded by his family and friends.

Born with achondroplasia, a genetic condition that results in dwarfism, Paul graduated from Harvard Law School in 1986 – several years before the passage of the Americans with Disabilities Act of 1990 –  and experienced firsthand the need for such legal protections when 45 law firms rejected him during his employment search. One member of a firm told him why he was rejected: for fear their clients would think that they were running a “circus freak show.” Despite facing such overt discrimination in his early career, Paul became an internationally acclaimed expert in discrimination and disability law and was the trusted advisor on these issues to Presidents Clinton and Obama.

In 2004, Paul left the EEOC and accepted the position of professor and director of the Disability Studies Program at the University of Washington. In early 2009, Paul took a leave from the university to become Special Assistant to President Obama for managing appointments and nominations to the Department of Justice and the Department of Education. Additionally, Paul served on the Obama transition team at the Department of Labor.

Paul is survived by his wife, Jenni Mechem, and his two young daughters, Naomi and Delia.

Our thoughts and love go out to them as we remember the amazing Paul Steven Miller.