One of DRI’s main strategic goals is to advance the right of all people with disabilities to live as part of society. While Article 19 of the UN Convention on the Rights of Persons with Disabilities establishes a right to live in the community with choices equal to others, millions of children and adults with disabilities remain detained in orphanages, psychiatric facilities, and other institutions around the world. DRI’s strategic litigation project demonstrates that community integration is not just good social policy – it is an enforceable right. Over more than twenty years, DRI has supported lawyers working in their own countries to implement the right to community integration through their own course. We are especially proud of supporting the cutting edge work of Partners for Human Rights in the Republic of Georgia who have won test cases with national impact in their country.

DRI has specialized in the use of the Inter-American system of human rights. We have conducted numerous thematic hearings before the Commission to sensitize governments throughout the Americas about the special concerns of people locked in institutions. DRI brought the first and only two petitions for precautionary measures to demand life-saving protections and community integration for people with disabilities in Paraguay and Guatemala. Building on our work in Guatemala, DRI has filed the first case before the Inter-American Commission seeking a broad right to community integration under the American Convention.

In 2003, DRI filed a petition before the Inter-American Commission on Human Rights (IACHR) for precautionary measures, a type of emergency relief, on behalf of two teenage boys with autism, Julio and Jorge. Precautionary measures are an instrument within the inter-American human rights system that allows the Commission to promptly address compelling human rights violations. 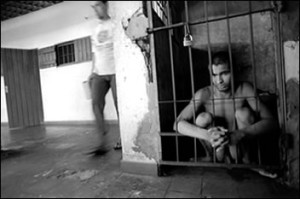 Julio (above) and Jorge were kept in isolation in cages for more than six years.

DRI argued that Paraguay’s detention and confinement of Julio, Jorge, and the other 458 individuals held in the hospital presented a grave and urgent risk to their lives.

Julio and Jorge were detained in small isolation cells in the state-run Neuro-Psychiatric Hospital in Paraguay. Holes in their cell floors designed to function as latrines were crammed and caked over with excrement, and each boy was infested with lice. They spent approximately four hours every other day in an outdoor pen which was littered with human excrement, garbage, and broken glass. While documenting these conditions, DRI investigators discovered that the conditions for the other 458 individuals detained in the institution differed little from the abusive conditions Julio and Jorge suffered. 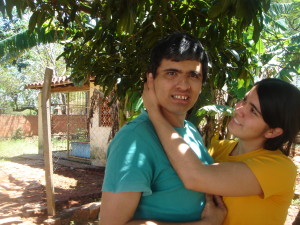 Jorge at home with his sister.

The IACHR approved urgent measures to protect the lives and physical, mental, and moral integrity of people detained in the Neuro-Psychiatric Hospital. Conditions improved for Jorge and Julio, but the government of Paraguay had done little to improve the situation for the other 458 detainees. The underlying problem remained – the lack of community-based services in Paraguay led to the improper detention of people in psychiatric facilities.

Finally, in 2005, DRI and the Center for Justice and International Law (CEJIL) signed an historic agreement with the Paraguayan government aimed at ending the improper detention of hundreds of people in the country’s state-run psychiatric hospital. This was the first agreement in Latin America to guarantee the rights of people to live and receive mental health services in the community. Jorge now lives with his family in the community (see photo at right).

In October of 2012, Disability Rights International filed a petition for precautionary measures with the Inter-American Commission of Human Rights on behalf of 334 children and adults detained at Federico Mora, a psychiatric hospital in Guatemala City. Federico Mora is the only public pyschiatric facility for adults in Guatamala, a country with a population of around 14 million people.

There are no public community-based services or support systems in Guatemala for adults with mental illness or psychosocial disabilities. Given this lack of alternatives, many people with disabilities and their families have nowhere else to turn. Some patients were placed at Federico Mora by family members against their will. Any person in Guatemala who has a psychiatric breakdown or an intellectual disability is at risk of being detained at Federico Mora. Under Guatemalan law, people may be detained by an emergency court order for up to 30 days, but many people languish in Federico Mora against medical or psychiatric recommendations because of a lack of judicial review, or because they have no place else to go.

The facility is intended for adults, but children as young as fifteen are mixed in with the adult population. The hospital is located next to a prison, and numerous armed police and guards are stationed at the facility to watch over 70 criminally committed patients who are mixed in with a population of minors and adults with a range of intellectual and psychiatric disabilities.

DRI documented life-threatening abuses against children and adults in the facility, as well as trafficking of women for sex. The risk of physical and sexual abuse is so high that newly admitted minors are kept in isolation cells and adult women are locked in wards. Deaths in isolation rooms are common and people die from treatable infections because they are denied medical care. HIV exposure is widespread, and it is impossible to protect people admitted to the facility from exposure, given the high level of sexual abuse in the facility.

Armed guards – stationed at the institution to watch over “criminally committed patients” – roam freely throughout the facility and are alleged by both staff and patients to be the worst perpetrators of abuse and violence. Federico Mora houses people with both intellectual and psychiatric disabilities, many of whom are likely to be abandoned there for the rest of their lives.

The assistant director of Federico Mora lamented the situation: “We violate their human rights because we do not have the resources. There is no adequate manner to treat them. We do what we can, but we cannot reject court orders.”

The danger at the facility stems from a basic lack of law and order. Authorities did not regulate or supervise conditions in the hospital, failing to provide even basic life-and-death protections, let alone meaningful physical or mental health care. Psychiatric staff estimate that at least 20 patients die each year at Federico Mora – approximately 6% of its total population.

Based on these observations and interviews with staff and patients, DRI determined that any person, with or without a disability, detained in Federico Mora faced immediate risk to his or her life, health, and personal integrity, as well as risk of inhuman and degrading treatment. In the precautionary measures filed with the IACHR, DRI recommended that the government of Guatemala take immediate steps to end new placements at Federico Mora and create alternative safe places for children and adults with disabilities detained in the facility. The Guatemalan government signed an agreement to provide community services to persons with disabilities at Federico Mora and work to remove all patients detained there.

In 2016, the new government of Guatemala agreed to honor the original agreement and work with DRI to protect the human rights of persons with disabilities detained at Federico Mora.

DRI has provided support and advice to Partners for Human Rights, an organization bringing cutting edge litigation to implement the right to legal capacity, as protected by Article 12 of the Convention on the Rights of Persons with Disabilities, in the courts of the Republic of Georgia.

In this video, Anna Arganashvili of Partnership for Human Rights discusses a case brought by PHR before the Constitutional Court of Georgia which obtained human rights for people with disabilities in Georgia.