Washington, DC– A scathing article concerning the abuses against children with disabilities at the Judge Rotenberg Center (JRC) was published Saturday by the Guardian of London. Juan Mendez, the United Nations Special Rapporteur on Torture, told the Guardian he is “very concerned,” about the use of electric shocks as aversive treatment on children with disabilities at JRC. “I feel very strongly that electricity applied to a person’s body creates a very extreme form of pain. There are a lot of lingering consequences including mental illness that can be devastating,” Mendez said.

According to the Guardian, Mendez has opened discussions with the US mission to the United Nations, plans on contacting the US State Department, and has the option of reporting the abuses to the UN human rights council. In 2010, Mendez’s predecessor as the Special Rapporteur, Manfred Nowak, responded to an urgent appeal filed by DRI finding that the electric shocks at JRC constituted torture. “I have no doubts about it,” said Nowak, “It is inflicted in a situation where a victim is powerless. And, I mean, a child in the restraint chair, being then subjected to electric shocks, how more powerless can you be?”

Following DRI’s 2010 report, the controversy over JRC has reached a critical tipping point. Most recently, the family of Andre McCollins, a former student and victim of electric shocks for 7 hours sued the Rotenberg Center for malpractice. The case was settled for an undisclosed amount; however, as a result of the lawsuit, a horrifying video of Andre being shocked was released to the public for the first time and has brought JRC into the national and international spotlight once again. The electric shocks used at the school are “a horrific form of torture,” DRI President Laurie Ahern is quoted as saying in the Guardian. “What happened in that video is worse than anything I have ever seen done to a prisoner of war or a political victim around the world.”

On Saturday, DRI President Laurie Ahern attended a rally opposing JRC outside the Massachusetts State House in Boston. Earlier in the year, revision to state policies banned the use of electric shocks for any new admissions to the facility. However, children currently in the school are still subjected to the painful electrical shocks. A bill that would ban the use of all electric shocks as aversive therapy in Massachusetts has passed the State Senate and is now being considered by the House. “Disability Rights International applauds the courageous lawmakers fighting these abuses on the state level,” says Ahern, “However, it is crucial that the Obama Administration takes an immediate and decisive stand on torture against people with disabilities in the United States to ensure that these abuses can never happen again in our own backyard.” 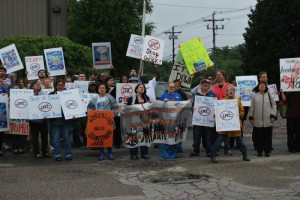