Washington, DC, Guatemala City – March 9, 2017 – 31 teenage girls have perished in a so-called “safe house” outside Guatemala City, Guatemala, because they were locked in their room during a fire. The girls were protesting the sexual abuse and trafficking they were subjected to in the institution – leading to being locked in the room as punishment. A team of DRI investigators was in Guatemala to investigate this safe house when the fire broke out on Wednesday, and reports that out of 63 girls locked in the room, 31 have died and 32 have serious burns. More than 650 children still remain in the institution. Read the Toronto Star article about this tragedy here. 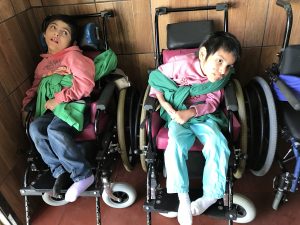 Survivors of the fire restrained in a new orphanage

All over the world, children are locked up and restrained in orphanages and institutions where the same patterns of abuse and neglect play out day after day. DRI’s Worldwide Campaign to End the Institutionalization of Children is fighting to unlock the cage and stop abuses against children in orphanages and institutions. Join the Worldwide Campaign Against the Institutionalization of Children today by donating now.