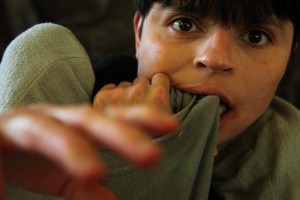 DRI called on the IACHR to visit Mexico to witness the atrocious human rights violations taking place in Mexican institutions. “The United Nations has stated that the prolonged use of restraints constitutes nothing less than torture. We found widespread torture in Mexico’s institutions,” said DRI Executive Director Eric Rosenthal.

DRI’s video testimony shows people tied to beds and wheelchairs – in some cases, for 10 years. Additionally, the video documents the inhumane and unhygienic conditions to which Mexico’s most vulnerable citizens are subjected. Without any oversight, children have literally disappeared from Mexican institutions and in some cases, girls detained in institutions were trafficked for sex. DRI also found young adults are held in institutions entirely off the public record, working without compensation – essentially as slave labor.

The findings of our investigation were published in 2011 by DRI and CMDPDH as Abandoned & Disappeared: Mexico’s Segregation and Abuse of Children and Adults with Disabilities.

The video of the full hearing before the Inter-American Commission is available here.